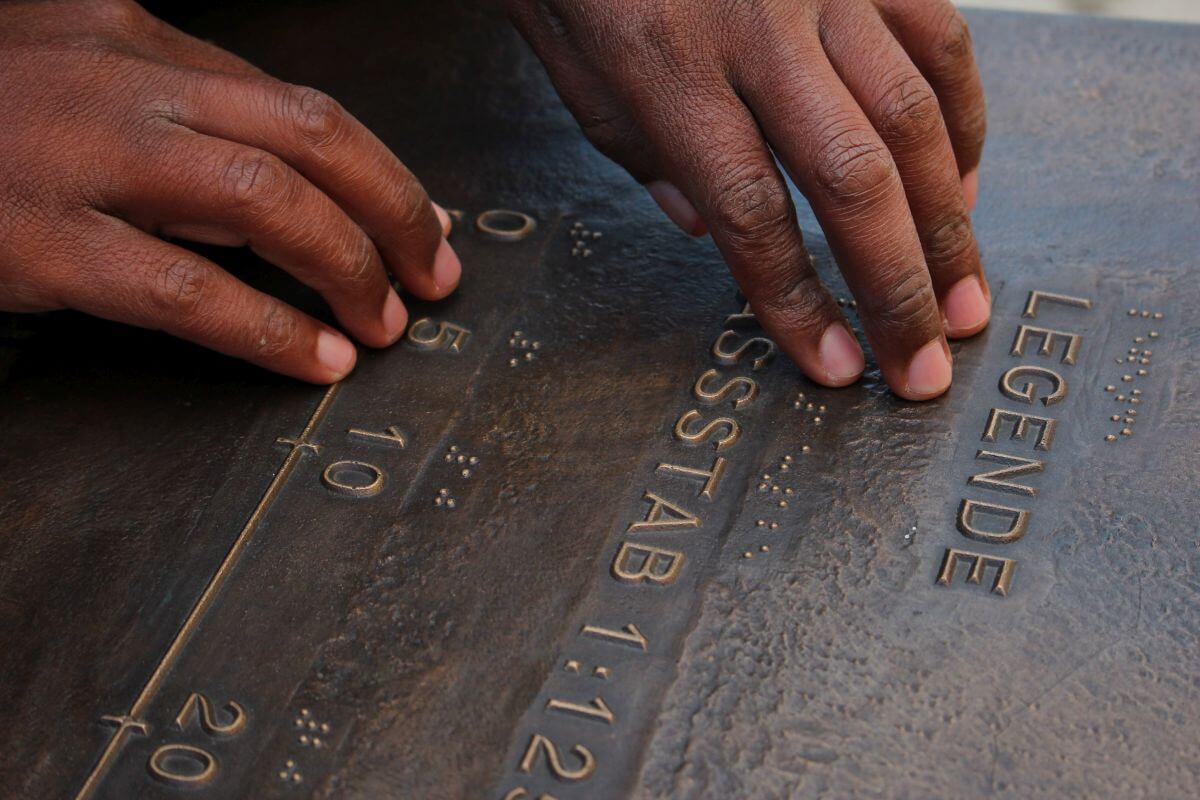 Project participant from Ethiopia feels the letters on a metal plate.

The ‘Audiobook’ pilot project provides knowledge and skills in the production of audio formats, and presents reports in two radio features.

The German Central Library for the Blind (DZB) has been implementing another Nakopa pilot project together with the Ethiopian non-governmental organization called ‚Together!‘. With a variety of activities, the NGO supports blind and visually impaired people in Addis Ababa to find their way in everyday life, for example by offering computer courses, all-day childcare for working mothers, or free accommodation.

Access to information is an important common issue for the DZB and the ‘Together!’ NGO. The production of Braille literature is a complex and expensive process, and access to Braille books is limited in Addis Ababa. However, audio formats (audio books, radio dramas, radio features, etc.) offer an alternative and can be made available to the public at relatively low cost via MP3 players.

In this cooperation, employees of the NGO in Addis Ababa shall learn journalistic and technical skills for the production of audio formats. For this purpose, two participants from Addis Ababa attended a one-week workshop in February 2018 involving journalist Nora Gohlke, a DZB technician, and project coordinator Ludwig Henne.

With the aim of enhancing the acquired knowledge of the participants, Nora Gohlke travelled to Addis Ababa in autumn 2018 where she gave workshops on audio production software at the ‘Together!’ NGO. An important prerequisite for the production of audio formats is a recording studio, which was also set up at the NGO in the course of the project. Meanwhile, ‘Together!’ is able to produce its own audio formats to provide them to the community.

The project also includes two radio features on „Blind Life“, for which the journalist Nora Gohlke spent several weeks researching, recording, and producing radio reports in Germany and Ethiopia. These radio features report on the lives of blind and visually impaired people in both countries in order to promote public awareness of the issue. To this end, she teamed up with the partners of the ‘Together!’ NGO to work out topics and conduct interviews in Germany and Ethiopia. When the collaborator Habtamu Shiawul from ‘Together!’ came to Leipzig in February 2018, he made his first big trip by plane. Nora Gohlke interviewed him about travelling. Together they went to visit a visually impaired woman that travels a lot. Both interviews became part of the radio feature. In Addis Ababa, Nora Gohlke was guided through the house of the ‘Together!’ NGO and interviewed several staff members. Moreover, she accompanied two blind people through the city and did interviews with them. Both of them had received support and training from ‘Together!’. Samuel Hailemariam works in a ministry today. Enaniye Yalew has a job in a workshop that makes carpets. The radio feature introduces both of them. In Germany, Nora Gohlke continued to do recordings with blind people who like being on the road or travelling. For example, they ride a tandem bicycle or hike in a travel group for blind people. All recordings have been edited for the radio features and are ready for release.