170 children join in ‘City within the City’ holiday activity 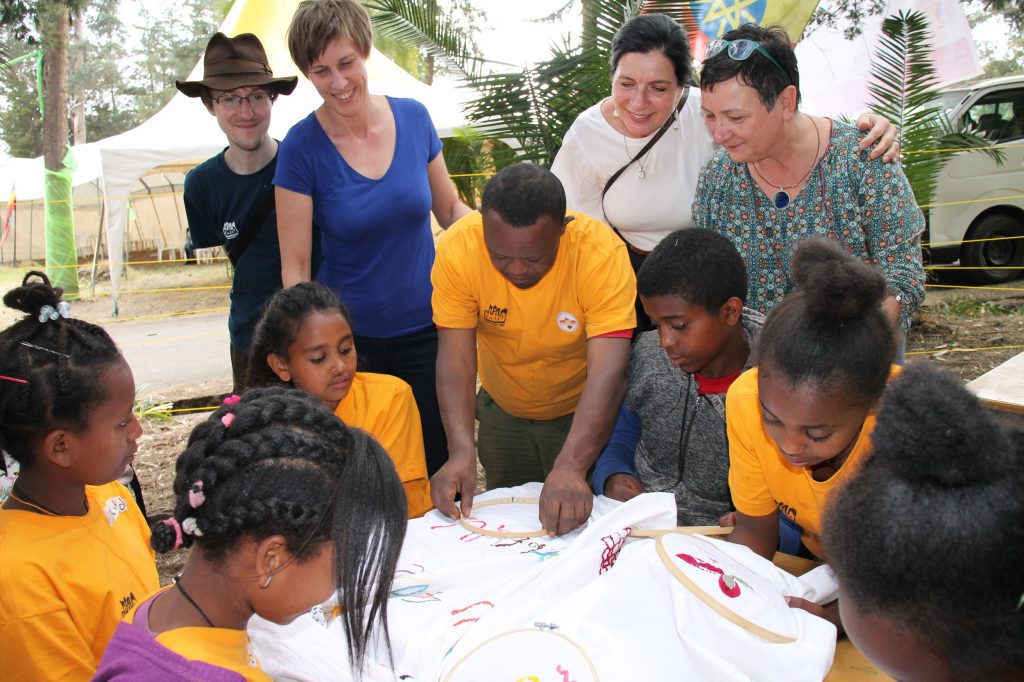 Boy with Down syndrome and other children embroider on a large scarf while members of the Leipzig delegation are watching.

The inclusive simulation game called City within the City was organized in Addis Ababa from February 4 to 8, 2019. On the premises of Entoto Polytechnic College and Tegbared College, participants with and without disabilities designed a barrier-free city.

Is it possible to transfer one of Leipzig’s holiday activities into an Ethiopian environment? After spending a week in Addis Ababa, Ulrike Bernard, Managing Director of ‘Haus Steinstraße’ sociocultural centre, confirmed her satisfaction. „Basic needs of people are the same everywhere“, she explained the success of the pilot project. 170 children with and without disabilities participated happily and enthusiastically in the game, as did numerous adult helpers with and without disabilities. More than 120 children built „their“ city on the premises of Entoto Polytechnic College. Another 50 children were actively engaged at Tegbaret College. For the imaginative design of the city and its houses, the children worked at many different game stations, for example graphic design, rug-making (carpet making), weaving, embroidery, sewing, electrical experiments, papier-mâché, wood sculptures, and recycling plastic waste. Following the event, several participating schools expressed their interest in organizing the holiday activity themselves in the future. The participants in Addis Ababa established new contacts and expanded their network. The members of a delegation from Leipzig returned home enriched with ideas for their own work.

The following members were part of the delegation of experts headed by Katja Roloff, Office for International Affairs: